Is There a Marijuana Breathalyzer in Alaska? 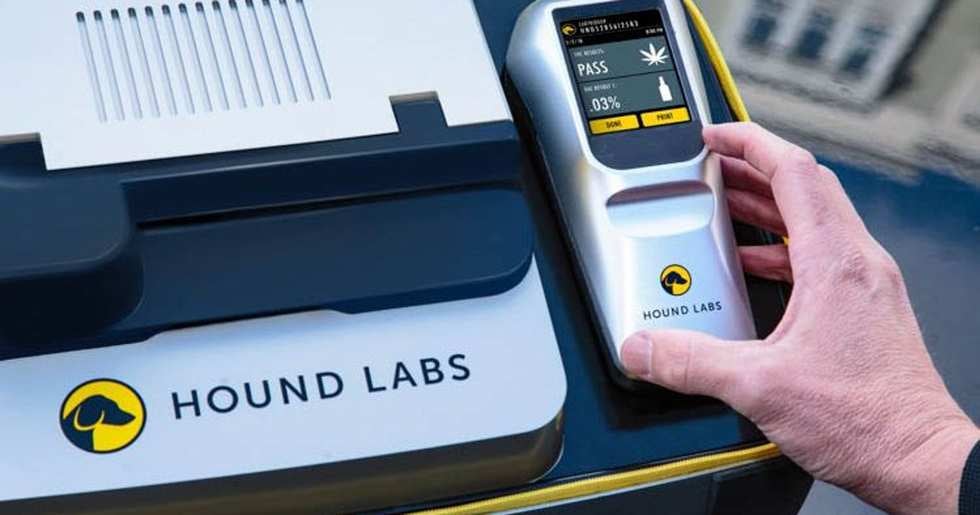 Has a Marijuana Breathalyzer Been Invented, Yet?

As legalization of recreational and medical marijuana expands across the country, police and communities they cover are worried about “stoned” drivers taking to the highways and byways. While we all know about the common instrument usually referred to as a “breathalyzer” (which was a brand name but has become a generic name like “Band-Aid” or “Aspirin”) which tests for alcohol levels in one's body, there is a lot of mystery that surrounds the urban legend: the marijuana breathalyzer. With few accurate roadside tools to detect marijuana-impaired drivers, police usually rely largely on field sobriety tests (FSTs) originally developed decades ago to combat drunk-driving. This leaves police, prosecutors, courts, and marijuana users themselves frustrated. Thirty-three states and the District of Columbia currently have passed laws broadly legalizing marijuana in some form. The District of Columbia and 10 states — Alaska, California, Colorado, Maine, Massachusetts, Michigan, Nevada, Oregon, Vermont and Washington — have passed laws legalizing marijuana for adult recreational use. Michigan voters approved a ballot measure permitting adults age 21 and over to purchase and possess recreational-use marijuana. Vermont became the first state in 2018 to legalize marijuana for recreational use through the legislative process, rather than via a ballot measure.

Now one California company claims it has made a major: the first workable marijuana breathalyzer. The goal of Hound Labs in Oakland, California is purportedly the establishment proof of impairment by marijuana rational and to balance fairness and safety.

How Does the Marijuana Breathalyzer Work?

If the police have probable cause to believe a driver in Alaska is impaired by the consumption of cannabis, they may ask the driver to blow into the tube for the required 30 seconds. An indicator lights up a series of bars if the machine detects any THC in the driver's breath. (THC is the psychoactive component in marijuana that gets you high.) Hound Labs says its device can accurately detect whether a person has smoked marijuana in the last two hours. Two hours is the window many toxicologists consider the “peak impairment” time frame. According to the CEO of Hound Labs, a physician and SWAT team member (the same dude): “When you find THC in breath, you can be pretty darn sure that somebody smoked pot in the last couple of hours. And we don't want to have people driving during that time period or, frankly, at a work site in a construction zone.” After the suspected high driver manages to put 30 seconds of air into the cartridge, the police insert it into a small base station to protect against cold or hot extremes; that is, the marijuana breathalyzer needs a consistent temperature to have consistent results. (The same is true for alcohol breath testers because as the temperature increases, the Blood-Alcohol Content artificially increases.) For convenience, this new fangled marijuana breathalyzer also measures alcohol on the breath, so police can get a quick indicator of both at once.

It takes about 4 minutes to get a test result from this new device, which is much longer than the several seconds it takes to analyze alcohol with a preliminary breath tester (PBT) when used roadside. But, to its credit, this is much faster than current marijuana-testing tools (such as blood, saliva or urine), which usually take days if not weeks to get back the results. Also, what could give this marijuana breathalyzer in advantage, is that those other testing procedures do not distinguish between marijuana consumed an hour ago or two weeks ago (because THC is fat-soluble and can stay in the body for about a month after the last usage). While alcohol on the breath is measured in parts-per-thousand, THC is much, much smaller: this device claims to be able to measure THC in breath molecules in parts-per-trillion. It remains to be seen whether this new instrument will stand up to rigorous scientific testing once it becomes widely available. Even the manufacturer admits that their machine only detects the presence of THC, but it cannot calculate the amount of THC consumed.

What Constitutes “Impairment” by Marijuana?

Despite that marijuana has been around thousands of years, there is still no agreement on what amount or level of THC in one's breath, blood or saliva constitutes functional “impairment” for the purpose of applying DUI laws. Under Alaska law, there are two ways to commit a DUI offense: (1) by driving with .08% blood alcohol content on one's breath, or (2) “while under the influence of an alcoholic beverage, intoxicating liquor, inhalant, or any controlled substance, singly or in combination.” These two theories of impairment are often colloquially referred to as the “per se” theory and the “under the influence” theory. Obviously, if the driver has not been drinking, or has consumed very little alcohol, the “per se” theory will not come into play. Instead, someone suspected of marijuana impairment while driving will be charged for driving “under the influence.” To be convicted under this latter theory, the state would have to prove beyond a reasonable doubt the person was driving for operating a motor vehicle when “as a result of marijuana consumption person's physical or mental abilities are impaired to the extent that the person no longer has the ability to drive or operate a vehicle with the caution characteristic of a person of ordinary prudence who is not under the influence.”

Please be aware that the extent of impairment sufficient to sustain a conviction is very slight. That is to say, one does not have to be heavily impaired to violate this DUI law, because the Alaska Court of Appeals has ruled that even slight physical or mental impairment – compared to that person's sober state – could be sufficient for conviction. When the suspect driver does not have a breath test result, or their breath test result for alcohol consumption is low, the state will try to prove the person's guilt by evidence of field sobriety tests, poor driving, and other observations made by the officer. While not yet available in Alaska or any other state, it probably will not be long before a marijuana breathalyzer becomes another piece of evidence used to try to convict someone of impaired driving.

Is There a “Legal Limit” for Marijuana?

Unlike alcohol, Alaska does not have a legal guideline for how much THC is too much before somebody may be convicted of DUI. We all know that .08% blood alcohol content is the legal limit for alcohol, but there is no such limit for THC/marijuana. Currently, there are only seven states who have set legal guidelines for how much THC is too much and would equal an automatic DUI similar to the .08% BAC prohibition. The states which have set that legal guideline more or less pick it out of the air because it is not backed by any hard science. Indeed, studies on marijuana and its effects on driving over the past several decades have been quite mixed. Some of the studies have failed to show any connection between marijuana consumption and a greater risk of crashing while driving, and some have even shown marijuana users are safer than sober drivers (possibly because of a compensation effect and/or heightened focus on safe driving after consuming cannabis). To be frank, to what extent and how long marijuana affects driving response, judgment and skill is not yet fully known. In what role, if any, marijuana played in those car crashes we hear about is unclear.

When Will We See a Marijuana Breathalyzer in Alaska?

Again, the marijuana breathalyzer is speculative at best and seems mostly like a money-making machine rather than a drug-testing scientific instrument. Some people “can be extremely impaired at 1 nanogram per milliliter [ng/mL], but other people may not have much impairment at all at 5 ng/mL,” says Marilyn Huestis, a toxicologist and adjunct professor of epidemiology and public health at the University of Maryland School of Medicine. This is why as an expert she believes that researchers need to develop a better understanding of the effects of not only THC, but also the more than 500 (!) other compounds found in marijuana.

What Should I Do If Stopped for a Marijuana DUI?

A common refrain in criminal defense law holds true here: The less you say, the better. It goes without saying that you should wait after consuming marijuana before driving so that you are completely sober when you hit the road. As mentioned above, a DUI for “under the influence” is not hard to prove because one's physical or mental faculties only need to be mildly impaired to warrant a criminal conviction. Do not drive high! Do not drive buzzed! Do not drive while smoking marijuana! Driving is a complex task which takes all of your focus; texting, talking, fiddling with other devices in the vehicle, and a hundred other things can distract you for only a second or two and make you a 6,000-pound missile. At highway speeds, you are traveling about 100 feet per second! So, taking your eyes off the road long enough to change the station on the radio allows you to travel the length of a football field — all while not watching the road. It's not up for debate: marijuana does impair driving. It affects the way people drive in two major ways: by affecting two regions of the brain — the cerebellum and basal ganglia — that are involved in planning and controlling the muscle movements. Such movements are needed to control a car during driving.

I personally would politely decline Field Sobriety Tests if asked to do them by police (even if sober). These are not really “sobriety” tests at all; instead, they are balance, coordination and focus exercises designed to be difficult (especially when nervous).

Will Hiring a Lawyer Help Me If I Receive a Marijuana DUI?

Yes. A consultation with a skilled DUI defense lawyer might save you a lot of time, energy and time in prison. Keep in mind that a lawyer is your legal advocate and must give you sound advice rather than telling you whatever they think you want to hear to get you to hire them. If you have any further questions about this topic, feel free to call my office in at 907.262.9164 or send me an email personally at [email protected]